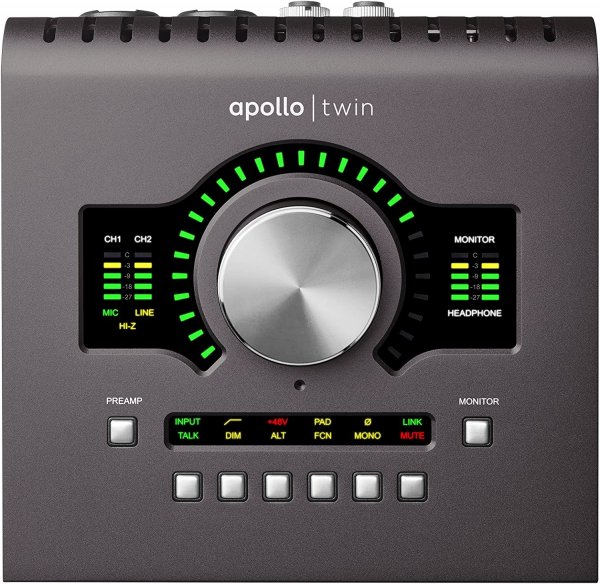 Realtime UAD-2 Processing — a Studio Full of Analog Sounds
Building upon the Apollo tradition, Apollo Twin MkII opens up a range of classic analog tones and color via its Realtime UAD Processing. Available with a choice of UAD-2 QUAD, DUO, or SOLO Core processing onboard, Apollo Twin lets you record through the full range of UAD Powered Plug-Ins — at near-zero latency. Right out of the box, the Apollo Twin MkII includes the “ Realtime Analog Classics” suite of UAD plug-ins—the UA 610-B Tube Preamp & EQ, Raw Distortion, Softube Amp Rooms, legacy LA-2A and 1176LN compressors, Pultec EQs, and more—so you have a rack full of bonafide audio classics already onboard. Unlike competing interfaces, the Apollo Twin MkII powers UAD plug-ins inside all major DAWs for mixing and mastering (VST, RTAS, AU, AAX 64 format), greatly offloading the processing required from your host Mac or PC.

Available with UAD-2 QUAD, DUO, and SOLO Core Processing
In addition to the popular UAD-2 SOLO and DUO Core models, Apollo Twin MkII is available in an ultra-powerful UAD-2 QUAD Core model, allowing more plug-in horsepower for running the most complex and convincing analog emulations on the market.

Professional Performance and Scalability with Console 2
Users of Apollo Twin MkII can combine up to four Apollos and six total UAD-2 devices — adding I/O and DSP as your studio grows. Once you expand your studio with anApollo 8, 8p, or 16 rackmount unit, you can use Apollo Twin as a desktop monitor control while still tapping its additional I/O and DSP power.