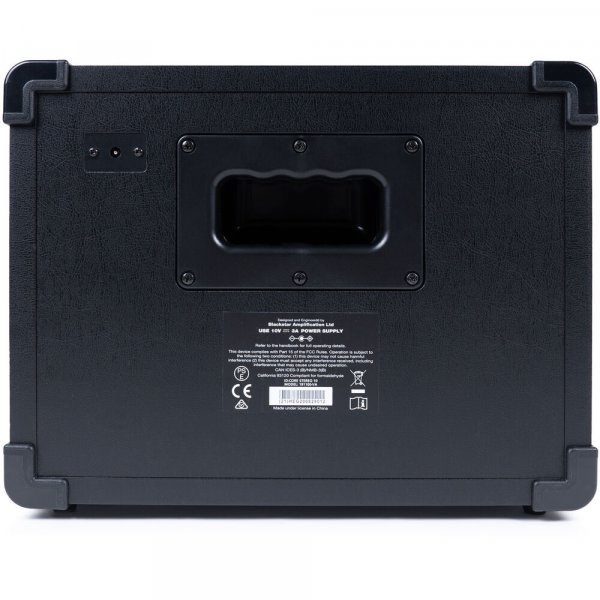 The Blackstar V3 ID:Core 10 Stereo Digital 2 x 5W Modeling Combo Amplifier is a 2 x 5W two-channel entry-level combo guitar amplifier with twelve wide stereo effects, six enhanced Voice channels, and a TRRS 3.5mm stereo aux-in / line-out jack for live streaming with compatible devices. It can be used for a variety of applications such as practicing, recording at home, live streaming, rehearsing with a band, recording in the studio, or busking live on the street.

The ID:Core combo amplifier features two controls that allow you to design your own sound. First, a Voice control lets you switch among six overall voicings. Go between Clean Warm, Clean Bright, Crunch, Super Crunch, Overdrive 1, and Overdrive 2 voicings, depending on the music you want to play. The amp also offers an ISF control, which is a staple on high-end Blackstar amplifiers. By using the Voice control together with the ISF, you can easily dial in a variety of sounds, giving you the ability to bring the sounds you hear in your head to life.

This is a stereo amplifier housed in a relatively compact housing, so you'll have the ability to select among 12 wide stereo effects as well. You can store these effects settings with your sound.

While the amp features a broad array of hardware controls, you can also edit your sound much more comprehensively using Blackstar's deep editor software, which replaces the Insider app that came with the previous iteration of this series. A USB connector lets you to edit your tones with this software, and also facilitates the ability to record from your amp directly to your computer.

Another upgrade over the previous iteration of this amplifier is a user-configurable Cab Rig output, which updates the emulated speaker output to give you a more realistic sound, allowing user-configurable controls for cabinet and room environment. Indeed, the Cab Rig software that corresponds to this output allows for similar controls to what you'd find on a high-end standalone cab-simulator product.

The Voice control has six different channels and when used together with Blackstar's patented ISF control you can get the exact tone you're thinking ofSuperwide Stereo
Blackstar's unique superwide stereo technology gives you an immersive sound experience that will have you playing along to your MP3 backing tracks for hours
12 Stereo Effects
12 wide stereo effects are included
PB-1 Power Bank Compatibility
This amp works with the separately available PB-1 Power Bank, so you can use the ID:CORE 10 anywhere you'd like