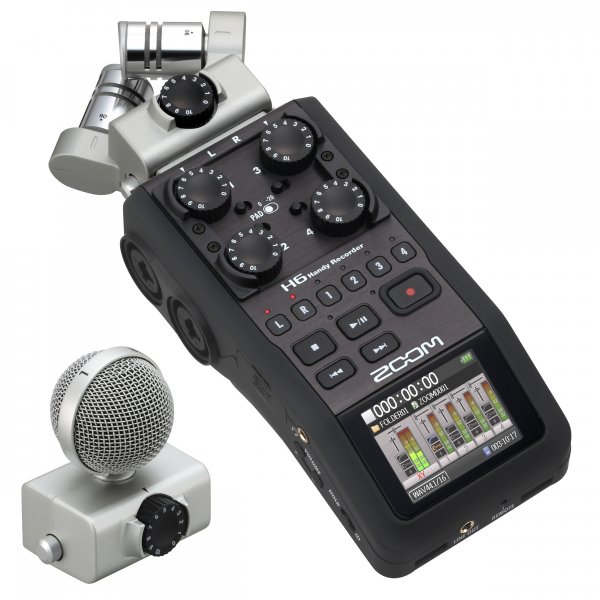 All of the input and output options you need

One of the things that make the Zoom H6 Handy Recorder such a field-recording workhorse is its extensive I/O, which puts its functionality comfortably on par with the high-end dedicated recorders used by film and television professionals. On the body of the H6 alone, you'll find four combo jacks, each with its own volume dial and switchable -20dB pad. These inputs let you connect anything from phantom-powered condenser microphones to extremely hot line-level sources. Cooler still is the H6's modular expansion port, which lets you connect microphones such as the included XY or Mid-side capsules. Read all about them in our Zoom Capsule Buying Guide. As for monitoring, you get both a line and a headphone out on the H6, plus a built-in speaker for mono playback. With Pre-record, Backup-record, and Auto-record functions

There's something inherently unpredictable about field recording, which makes it unnervingly easy to miss critical takes. Zoom equipped their H6 Handy Recorder with three powerful recording modes to spare you the stress of a lost or ruined recording opportunity: Pre-record, Backup-record, and Auto-record. With Pre-record, the H6 is continuously buffering the last two seconds of audio, which it includes with every recording. So, even if you hit record late, you're still likely to capture the sound you thought you missed. Along a similar line of thinking is the H6's Backup-record function, which records a separate stereo mix at 12dB down from your current settings. That way, if a sudden audio spike causes your input to clip, you still have a clean backup to work with. Finally, there's Auto-record, which starts recording when the volume passes a certain threshold.